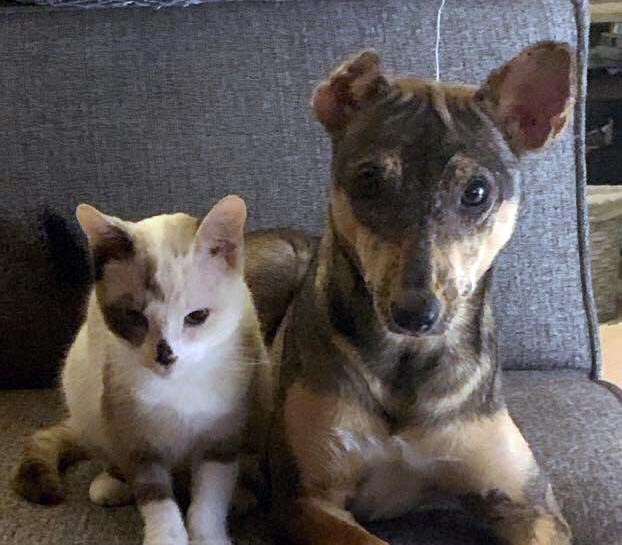 Recently, three children, under the exact instruction of their father, tortured a puppy and then set her alight. Her terrible cries alerted someone who rescued her. She was rushed to a vet who, sensing an extraordinary will to live, succeeded in saving her life. In response to this cruel, unconscionable deed, Sarah Clayton of Clayton Communications, the person responsible for the little dog’s subsequent specialist treatment and recovery, set up The Cactus Foundation.

This foundation is mandated to teach children to be aware of the sentience of animals, to care for them and to erase all cruelty from their behaviour patterns. The puppy, whom Sarah named Phoebe, has become the ambassador of The Cactus Foundation.

I am collaborating with Sarah in the production of books to introduce children to the marvels of the natural world and the deep friendship bonds that can be experienced with animals. Our first book is an anthology of poems titled “The Phoebe Book of Poems for Children”. This will be launched at the Poetry in McGregor Festival in November and at The Cactus Foundation Centre in Lusaka.

It was my pleasure, recently, to give a first reading from the anthology. This was to the Lemon & Lime Leucadendron Poetry Society, facilitated by Julia Kramer in Scarborough.

The poems I read have a measure of innocence to them, yet they don’t shield young people from an awareness of humanity’s exploitative attitude toward nature. They reflect on issues such as litter, pollution and hunting. But they do this in a restorative way, encouraging toward care. The poems presume that children, when taught and inspired, will take up a custodial attitude toward the Earth.

My Lemon & Lime Leucadendron audience was not one of children, so I could conclude the evening with some hard-hitting descriptions presented as ‘Found Poems’. These were taken from JM Coetzee’s novel “Waiting for the Barbarians” and from the hunting journals of Frederick Courtney Selous, Captain W Cornwallis Harris, and Robert Briggs Struthers.

I followed these with a poem by Don Pinnock [The Shrike] describing a childhood awakening of conscience. I concluded with a poem each by Marinella Garuti [Safari campfire in Quilengues] and Mario Garuti [Eucalypti] in which are presented an awareness of the beauty of nature, and an undertone request for forgiveness.
——————————————
Read Phoebe’s story https://cactusfoundation.africa/phoebes-story/
——————————————
The Cactus Foundation is an African based, direct-action organisation for the protection and welfare of animals and children on the continent. We give a voice to those most vulnerable in our communities, bringing hope, help, care and kindness to all in need.
——————————————
THE PHOEBE BOOK OF POEMS FOR CHILDREN