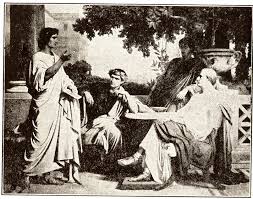 Can poetry improve the human condition in a time of moral darkness?

This was one of the provocative questions I was asked at the McGregor Poetry Festival last month.

I answered with an extract from my novel, The Master’s Ruse. This is a tale set in an apocalyptic time, in an unnamed country ruled by a military junta, where literature and freedom of speech have been banned.

In this novel, the two central characters, both banned authors, discuss the concept of messianic energy and determine the best way for such energy to get through to humanity.

The ruling Junta burns books, so it’s impossible for a printed Biblios to be used to carry any message of redemption. The two authors conclude that it will be through a single, oral poem that this energy will present itself.

Such a poem would be recited by one person to another, passed from heart to heart, where it would heal and empower towards goodwill, serving as a shaft of illumination through humanity’s moral decline.

After my reading, while walking through the Temenos garden and later sitting in quietude at The Well, I reflected on authorial conscience and the responsibility that rests with writers, especially with poets.

It occurred to me that the Festival is not just a gathering of poets and celebration of words. It is deeper than that and more essential. The poets who gave generously of their creative energies were kindling an extraordinary flame – one that could indeed contribute towards illuminating our dark times.

Extract from The Master’s Ruse: “I thought to say that although books were banned, recitation would never be abolished. How could the civil guard silence the whispered ode, or the ululated praise poem, or the strummed ballad or the gestured haiku? Would they cut out the tongue of every citizen who spoke in rhyming couplets? Sew up all lips that uttered a fable?

“I thought to say that we should make use of this oral possibility and with it stitch morality and ethics back into place for, if not we authors, then who would do it? And if not in a literary way, then how would it ever be done?

“We could set in motion the release of literature and create the absolute of beauty with which to open the collective unconscious and instil peace therein. Enough of it to extinguish ignorance and break the cycle of war. Enough to end regimes and their concurrent genocides. Enough for humankind to look upon the earth, not as a possession, but as a cathedral into which we have been permitted to enter, momentarily, in the hugeness of time, in order only to pay homage. We could facilitate the messianic voice. We authors and poets together.

“Garbed as a poem, the messiah would indeed travel from heart to heart, undetected by military and mafia, by arms dealers and mining houses, by the architects of regime and junta. Dressed in verse, enrobed in meter and rhyme, the messiah would, without hindrance, illuminate humanity’s bleakest chambers.”

The McGregor Poetry Festival is the vision of Billy Kennedy, of Temenos Retreat in McGregor. The 2014 Festival was run by him with David Magner, Marinda Oosthuizen, Michael McKenzie and Jennifer Johnson.

Image: Horace, at the home of his patron Maecenas, reciting a poem to Virgil, Varius, and Maecenas, in a painting in the Luxembourg Gallery in Paris as rendered in an old textbook of Horace. www.minervaclassics.com