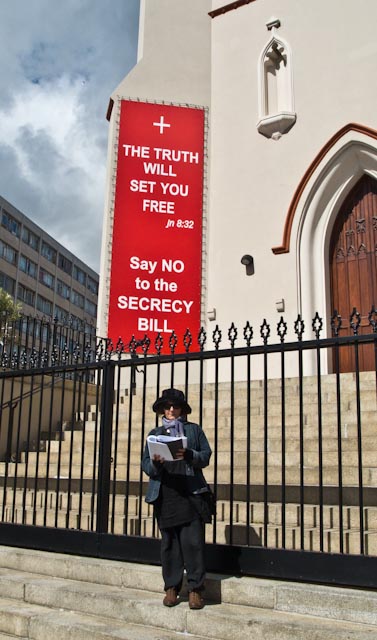 Standing on the steps of Cape Town’s Catholic Cathedral, reading aloud the opening speech, given by John Ralston Saul, at the 78 PEN
International Congress in Gyeongju, South Korea on 10 September 2012

“Gyeongju is a remarkable city. I have been coming here for fifteen years. It is a city not only of history but of ideas; a city built on the idea of a humanist civilization, both Buddhist and Confucian. I think often, wherever I am in the world, of the Divine Bell of the Great King Seong Deok from the eighth century, which sits a short distance from here.

“It is covered in script: the philosophy of the day. ‘The Absolute Truth’, it says, ‘embraces all of creation, here and beyond. We cannot see its real form, nor can we trace the path to its origin’.

“Here is a profoundly anti-ideological idea; an idea of doubt and of creativity, which writers can embrace today. And then this line: ‘The people [of the Silla Kingdom] admired literature and art over gold and jade’.

“Here is an idea which would mystify many of those who control policy around the world today – the belief that the imagination needs to trump mere self- interest.

“PEN is stronger in its 91st year than is has ever been. Why? Because we function on the fundamental principle of the Divine Bell. Creativity, imagination, language may be forbidden, battered, turned into propaganda in the short term. But creativity, the imagination, prevails.

“I say this even if over 800 of our colleagues are in prison or in danger. We prevail because we recover from all blows, even as the lives of writers – our colleagues – our members – are lost or ruined. Autocrats have their moment, but as Ko Un put it: ‘That dog that’ll die tomorrow, doesn’t know it’s going to die. It’s barking fiercely’.

“There is a central point about literature and its freedom of expression that must be continually reiterated. These words may contain beauty, be transformative, or offer pleasure or innocent thrills or anything else.

But there is nothing inherently respectable about us or about literature or about freedom of expression. Literature is not designed to reassure or to make people comfortable. That is the role of propaganda in all its forms.

Literature is thousands of years of making people uncomfortable, of encouraging uncertainty – whether in public or private lives. That is its strength. Literature is not about smoothness or agreement. We may cause discomfort or shock in any number of ways, whether in love or families, politics or religion. Civilizations at their best are built with the consciousness of discomfort. As for us, in Wole Soyinka’s words – ‘I –we – have failed in [our] ambition to grow old gracefully’.

“I am insisting on this because today we see three young women – Pussy Riot – imprisoned for long terms in Russia. What for? For disturbing the peace. Nothing more. Our member and former Centre President, Liu Xiaobo, remains unjustly in prison in China, along with many others, for disturbing the status quo. Treason laws are proliferating around the world and being used to silence and jail writers who are saying less than what I am saying here today.

“This is the fundamental and eternal challenge to literature which comes from power; what Jean-Marie Le Clézio describes as ‘la destruction des mythes par un désir de puissance’.

“The result is that many of our thousands of members, here in this room and around the world, famous and unknown, must begin each day asking, as Lee Gil-won asks: ‘Are we not those who have nothing more to lose? When the ploughed earth shows its inner flesh, let us at least plant some scallion roots’.

“These scallion roots, these words, are our force. Yes, of course, PEN excels in diplomacy. We struggle to keep writers alive, to free them – whether they are Nobel Laureates or teenage bloggers. Some of those bloggers who changed the regime in Tunisia are now rebuilding our PEN Centre there. Others, formal writers or bloggers, are on the line of greatest danger in Syria. We work endlessly to convince governments that they are capable of acting better – I will admit, a tiring business. We work for dialogue – words, more words – because that is the road away from conflict, towards peace. We defend languages in trouble through the Girona Manifesto. We work for a growth in translations because this is central to free expression – to understanding across linguistic barriers. What we do assumes the value of minority opinions and of cultures which find themselves in a minority.

“At this Congress we will try to adopt an historic declaration on Digital Rights in order to establish ethical parameters in this new world of communications. We will be asked to create a new Centre for North Korean writers in exile. We will continue strengthening our work with literature in schools, especially in Africa; developing free expression summer schools, beginning in Bishkek in Central Asia.

“Our 144 Centres in over 100 countries mean that we can be an Asian centred organization. Today the centre of PEN International is here in Gyeongju. On another day we could be centred anywhere else in the world.

“But through all of this work we must constantly remind ourselves that our cause is literature.

“Literature and freedom of expression are neither a nicety nor a legal technicality. They are a way of imagining the relationship between peoples. Between people. People who may disagree or dislike each other or, in fact, know nothing about each other.

“What is PEN? Why do we exist? Because literature and freedom of expression are a way of imagining civilization. How do we live together? Through words.”