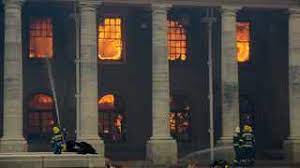 I was in the Cederberg mountains when the Great Fire of 2021 consumed the library of the University of Cape Town.

A runaway conflagration had raged across the slopes of Devil’s Peak and somehow (how?) reached the library, engulfing its archive of knowledge.

In the Cederberg, the rocks amongst which I and two others had camped are red, orange and yellow—like fire.

In the way of a library holding books, these rocks hold the narrative paintings of the San people, who once lived amongst them.

Back in Cape Town, I walked up to the fire line which is metres from the first row of houses in Vredehoek, the suburb where I live.

It was just before dawn.

The full huge setting moon was poised in the gap between Table Mountain and Lion’s Head.

I thought about ash.

I thought of the white ash—witnessed by a friend when she was a child—that had once been books, which fell like snow upon Coventry when it was bombed during World War 2, with its library being one of the victims, and the ‘snow’ being tiny fragments of pages.

I thought about loss of knowledge. Loss of integrity.

I thought about the Bleek Archive of San testimonies, which miraculously survived the inferno.

I thought of Pippa Skotnes, archivist and ‘spiritual’ curator of this irreplaceable archive, relieved that she was not in full mourning, but was in celebration of the Bleek collection’s survival, despite the other terrible losses suffered.

I tried to fathom how the fire had entered the library in the first place, afraid lest it had been opportunistically set alight through ignorance or malice.

I have not yet the courage to go to the gutted library, where survivor books are curled in pain.

Where others are rendered to ash.

Where here only some covers remain.

Where there nothing at all is left to speak of content, research, historic wealth, expressions of the human heart.

Yesterday, I drove the M3 and witnessed the sore, scorched earth of the mountain around the university campus.

The ground is black and the air still burdened with the acrid smell of consumption.

When the wind stirs, even slightly, it carries the fine, black powder of ruin, like gunpowder.