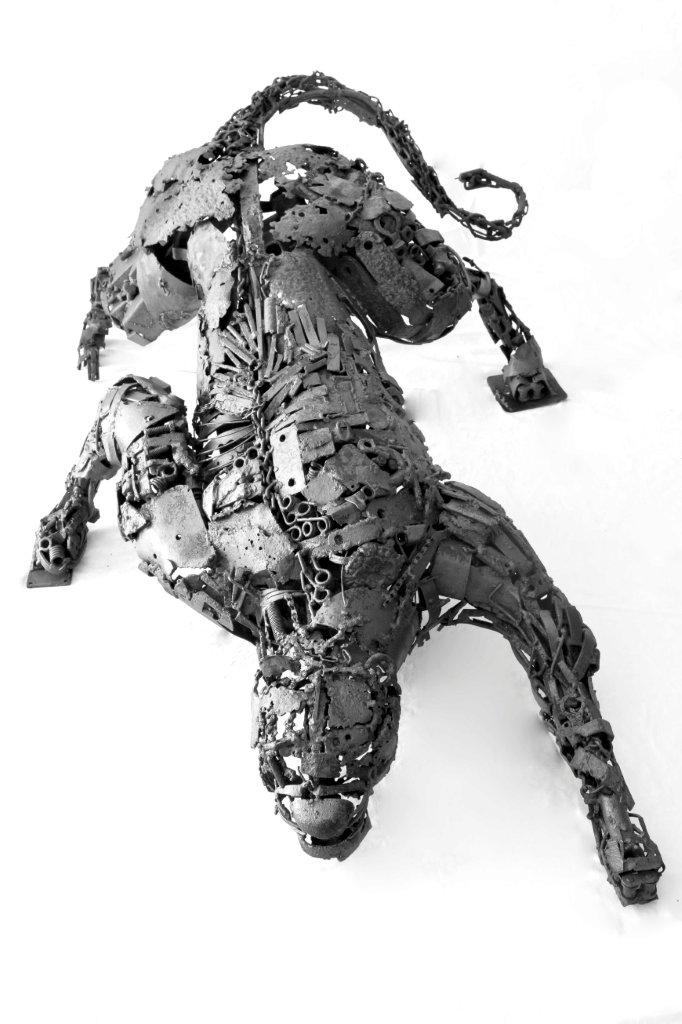 It was unveiled earlier this month at The Old Biscuit Mill in Cape Town by Justin Bonello and Francis Garrard of the Conservation Action Trust.

In creating the sculpture, Vaccaro used just some of the 220 gin traps collected from eleven farms in the Baviaanskloof area.

The sculpture is a monument to the thousands of leopards and other natural predators that suffer agonising deaths in gin traps.

It highlights that wild animals have a right to life and that the use of such traps by farmers is barbaric. There are more humane ways of protecting livestock from predators.

When I lived in Grahamstown, I was once called to the museum to see a leopard that had been brought in after being shot by farmers in Kasouga.

The leopard was newly dead.

I sat with him in the taxidermist’s workshop, filled with a sense of loss and deep mourning, in the way I would sit some time later with my father’s dead body.

The leopard still smelt of the bush and wildness.

His fur had the last of its gloss to it.

Later I wrote a song for him.

The last leopard of Kasouga

The last leopard of Kasouga
Came walking out one day
‘Where are my friends? Have they been banished?’
Is what the eagles heard him say.

‘Go back! Go back!’ cried the eagles
‘Go back into the hills!
If the farmers see you coming
It’s you they’re going to kill!’

That last leopard of Kasouga
Came down into the farms
And when the farmers saw him coming
They called their dogs and took up arms.

They found him hiding in the branches
Of an old mimosa tree
The dogs were barking and the farmers
Would not let that leopard free.

It was the Brothers Long who shot him
Who took his life away
The eagles flew away in sorrow
On Kasouga’s saddest day.

Kasouga was the place the Bushmen
Once knew and loved so well
They called it ‘Place of Many Leopards’
Now there’s nothing left to tell.

Robert Vaccaro’s sculpture ‘Gin Trap Leopard’ is currently on loan from the Conservation Action Trust to The Old Biscuit Mill. It will be displayed in a number of public places in and around Cape Town to create awareness of the perils facing leopards in the Cape mountains as well as the threat of their extinction.
www.conservationaction.co.za www.landmarkfoundation.org.za

Recent research by the Landmark Foundation shows that only between 350 and 700 leopards survive in the wildernesses in and around the Cape Folded Mountains.

See http://www.landmarkfoundation.org.za/gin-traps.html and reflect on the extreme cruelty of gin traps. 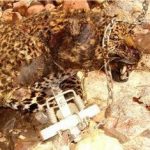 The leopard in this photo was caught in a gin trap on a farm in the Uniondale district, Western Cape. It died of agony, dehydration and sepsis, and was left to rot.