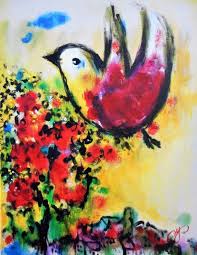 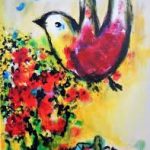 Testamento, a poem by Alda Lara, is about Deep-Giving.
By Deep-Giving, I mean the giving, not of accumulated material possessions that have no intrinsic value, but the giving of things that influence heart and soul during a life.

In her poem, Alda Lara bequeaths her true belongings to persons on the edge of society – ‘the youngest prostitute’; ‘the forgotten virgin’; ‘the humble men’; an unbeliever and street children.

Her possessions are, essentially, prayer, knowledge, mercy, love and beauty.

If we all traded in such commodities of the soul, we would make an extraordinary bequest to the human collective.
Much of our species’ distinctive and wretched greed for money and power might dissolve if we focused on the things truly worth granting and receiving.

Poetry is surely one such commodity.

To the youngest prostitute
in the oldest, darkest slum
I bequeath my earrings, carved
in crystal, limpid and pure…

And to the forgotten virgin,
girl without tenderness,
who dreams of legends
I leave my white dress,
my wedding dress,
all woven in lace…

And the books, my rosaries
of the sufferings of the past,
are for the humble men,
Who never knew how to read.

As for my crazy poems,
those of pain,
sincerity and discordance…
those of hope
desperate yet adamant
I leave to you my love…

That in the hour of peace
my spirit may soar and
from afar kiss your eyes.

Walk through the night ahead…
with steps shaped by the moon,
offer them to the children
that you find on every street…

——————————————————————————————-
Alda Lara (1930–1962 was born in Benguela, Angola, and attended the University of Coimbra in Portugal, where she obtained a degree in medicine. She lived in Portugal for thirteen years, during which time she married the Mozambican-Portuguese writer, Orlando Albuquerque, had four children and was an active contributor to Mensagem as well as various newspapers and magazines. Collections of her poems—Poemas in 1966 and Tempo da Chuva in 1973— were published posthumously.
——————————————————————————————–
Marinella Garuti was born in Angola to Italian parents. She studied graphic design at Michaelis School of Fine Arts in Cape Town and then returned to Angola where she farmed from 1967 until the outbreak of civil war in 1975. She moved to South Africa, first farming then working as a tour guide and ceramicist. Her work has been published in numerous anthologies.