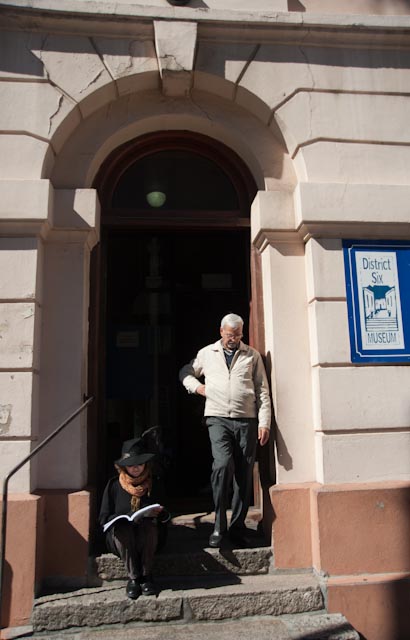 The two poems were read aloud outside the District Six Museum, opposite Caledon police station. Traffic noise was heavy but it did not drown the words. A man coming out of the museum exclaimed on the eloquence that the day seemed to hold. He looked around, not sure what it was that had touched him.

A second man took a photo and remarked:  “The funny thing is, that the book trade will tell you with an undertaker’s face: “But no one buys poetry!” Yet you see people packing into places like Off-the-Wall, or writing verses in their Moleskine notebooks, and then, in the most arbitrary of places, you’ll hear the most regular person reciting poems to anyone who cares to listen.’

Houses stand showing gaping wounds
the people they have sheltered are gone
a broken flower pot sits forlornly
on a windowsill
the lone flower it holds waves sadly
in the wind
a store shorn of goods sports a scabby cat
asleep on its shattered counter
people walk the street scanning each other’s face
for assurance that the District is still alive
a lorry trundles along tyres sagging
second-hand furniture going into exile.

James Mathews is one of 149 poets included in the anthology, Africa! My Africa!
He is a poet, writer and publisher. As a political activist against apartheid, he was detained and later denied a passport for 23 years.

Be listed as someone who bought a copy of the numbered signed first edition of Africa! My Africa! Order through afpress@iafrica.com