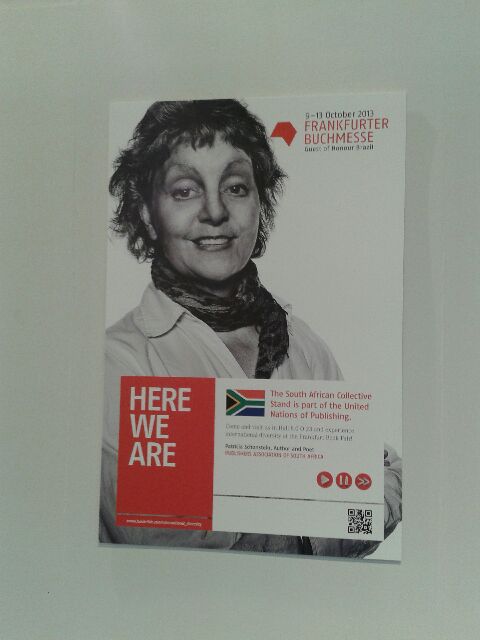 My paternal grandparents were victims of the Holocaust. My grandmother was transported through Theresienstadt to a concentration camp, probably Bergen Belsen, where she died of typhus.

Her remains might lie tangled in a Bergen Belsen mass grave, though she may have been incinerated. Those details remain unknown.

When I visited the Frankfurt Book Fair earlier this month, I brought with me two fat volumes of African poetry – hundreds of poems spanning all sorts of human emotions. One of the volumes focuses entirely on war and civil conflict.

I came to Frankfurt looking to exchange these poems from Africa with those I might find in Germany. I found poems in the old buildings that had survived the aerial bombings of World War 2; and in old doorways that had witnessed the rounding up of people destined for death in concentration camps.

One night a woman ran past me and I found a terrifying poem in the ringing panic of her shoes as they struck the pavement.

I found a defiant poem when I looked up and saw a single light burning in a single window of an otherwise darkened edifice.

Looking up at the sky, I watched clouds moving steadily in, I think from the North Sea, but I’m not sure, and read poems to them.

I read poems to the buildings and the doorways and the railway tracks. There was no revenge in the poems, no sense of retribution and no call for pay-back. They were presented in homage to my father, who remained haunted his whole life in not knowing where his mother lay buried.

I read poems to Frankfurt itself, the first German city I have ever walked through, and made of this a ritual, a gesture of goodwill.

Disarmament is a poem.

Embracing the perceived enemy is a poem.

Unconditional forgiveness is a poem.