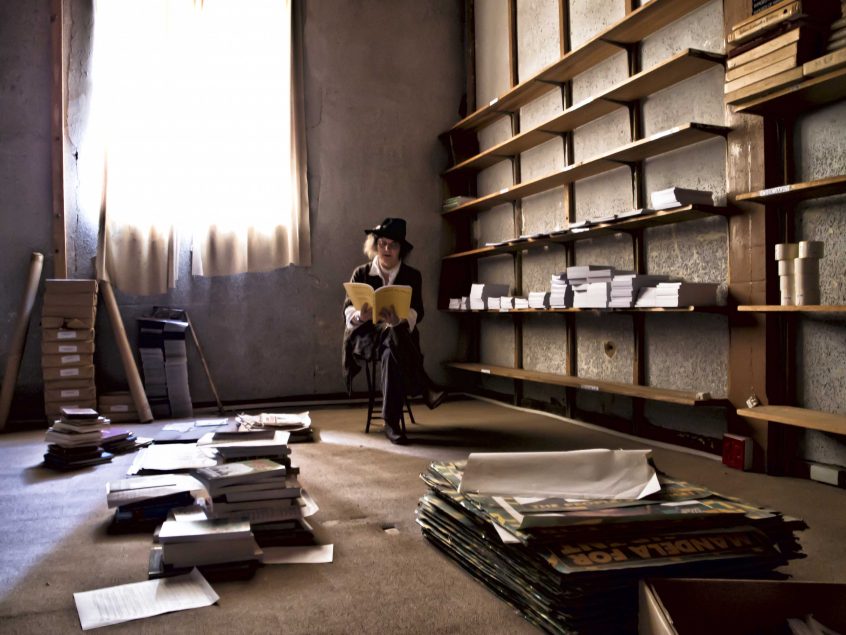 I  met Antony Clarke in 1975, in his bookshop in Long Street, when I first moved to Cape Town.

One day, in exchanging some details of our own histories, I told him that my mother was Italian. He then confided the remarkable story of how, as an Allied gunner officer during the Second World War, he had defied orders and held back from shelling the Tuscan town of Sansepolcro, where there were presumed to be German soldiers and the strong possibility of ambush.

What prevented him from giving the order to bombard the town was the memory of an essay written by Aldous Huxley. In that essay, Huxley had described The Resurrection, a fresco masterpiece by Piero della Francesca in Sansepolcro’s town hall, as being ‘The greatest painting in the world’.

Knowledge of Mr Clarke’s deed stunned me, for he would surely have been court martialled had there in fact been an ambush. I internalised his defiance as a benchmark of integrity in my understanding of war and destruction. ‘This should be in a book,’ I told him in a flush of youthful admiration.

Antony Clarke established Clarke’s Bookshop in 1956. It has traded at 211 Long Street since then and is now owned by Henrietta Dax. She has just this month had to move premises (a few doors down to number 199 Long Street) but has managed to relocate the shop’s atmosphere and spirit so entirely that one is hardly aware of the move at all.

Poems by Norman Clothier and Uys Krige were recited in the vacant premises of the ‘old shop’ in homage to Mr Clarke.

There is so little earth, and so much cold
Grey sky clamped down upon us that we seem
Cut off from any kinship with the world,
That safe sane world we knew once in a dream.
We have been set apart like fallen souls
Without a past or future to fulfil
Blindly a driving destiny that hurls
Us on towards a goal beyond our will.
We only know that nights are long, and sleep
Comes slow to shivering men who lie
On cold hard ground, and dawn brings no respite,
Only the pallid sun and sullen sky.
Always on every side our trucks intrude
Their stark forbidding shapes above a plain
Of stones and yellow earth and grey dwarf scrub,
Bleak under wind and clouds that bring no rain.
The idle anxious days draw out their length
Into uncharted seas of time, and all
The urgent incidents that stirred us once
Are blurred and fading, lost beyond recall.
We know capricious death drones overhead,
And, more insistent as our column runs
Into the unknown battles we must fight,
Lurks in the thudding menace of the guns.
And we are trapped, for there is no escape
From this colossal tumbril as it reels
On its relentless way towards the fate
That waits us in the west before our wheels.
But still we trick ourselves with poignant dreams
Of half-forgotten days, and long in vain
For the old easy life we knew at home
In peace – that we shall never know again.
Those things are not for us; ours is the way
That lies over the desert under sombre skies
Past rusting blackened wrecks of trucks and tanks
And graves of men who blazed it in this guise.

Blood-red the aloes flank
the winding road.
As if aflame with leaping sparks each fire-lily glows.
But nothing, nothing stirs … only
a breeze that flows
that seems to pause and waver there
the grass-seed grows.

Above, the blue, blue sky;
and far below, the falling stream
drifts through the orchards with
a flash of green.
And no sound breaks the hovering peace
of this still mountain scene.

Now after all the years I’ll open
a gate again.
Where have my paths
till now not led
to bring me to this farm-road gate
with all illusions shed
but hope, hope in my heart
and clear dreams in my head?

The gate stands in
a maroola’s shade.
A wholeness in me, harmony
and no bitterness, no hate.
I lift the catch … and in my heart
open a gate.

Norman Clothier (1915- ) was a long-serving National President of the South African Legion. His poems appeared in numerous anthologies and one collection.

The Resurrection by Piero della Francesca was painted in 1463.