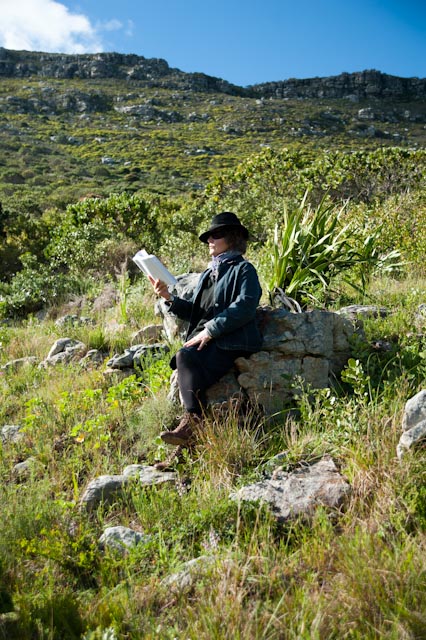 The poem was read aloud. The words were carried by a light wind over Clovelly, Fish Hoek and beyond.

Mairo Garuti wrote it in 1959 in Angola, in his middle years, to his wife. Now, many years later, it has become embossed with the weight of lives-long-lived, and with long-ago dreams. The farm Chipepe, where the words were first expressed, is no longer viable, for long-long war displaced many people and caused ruin on a massive scale.

But its words of love remain volatile and urgent. Read on this crisp-with-winter day, the poem allowed for reflection on the futility of war and the endurance of love.

The gift
For Teresa
Written on the farm Chipepe, in the central highlands of Angola, 1959
Mario Garuti
Translated from the Italian by Lara Gochin Raffaelli

We are united in what will unfold
as we journey forth toward a gold-misted destination
from the moment love first enveloped us
until the extinguishing of our life force.

Holding hands, close together
through the joys and pleasures that whip our senses
as upon a jetty where the foam of a frenzied sea
sprays our faces,
we turn to look back upon the flowers of our past scattered upon fields.

Even if, upon our naked bound-together bodies,
fall pain and sorrow, hard as hailstones,
we will still bring forth life, cultivating the seed of hope
in our children.

In the end, at the point of bidding adieu,
we will be at each other’s side
knowing each other so well
as to see, love and understand the universe with the eyes of the other.

Mario Garuti (1914-1985) is one of the poets featured in Africa! My Africa! He was born in Italy to a Russian mother and Milanese father. A graduate of the University of Perugia, he fell in love with Africa after active service in the second Italo-Abyssinia War and returned to farm in Angola from 1937-1977.