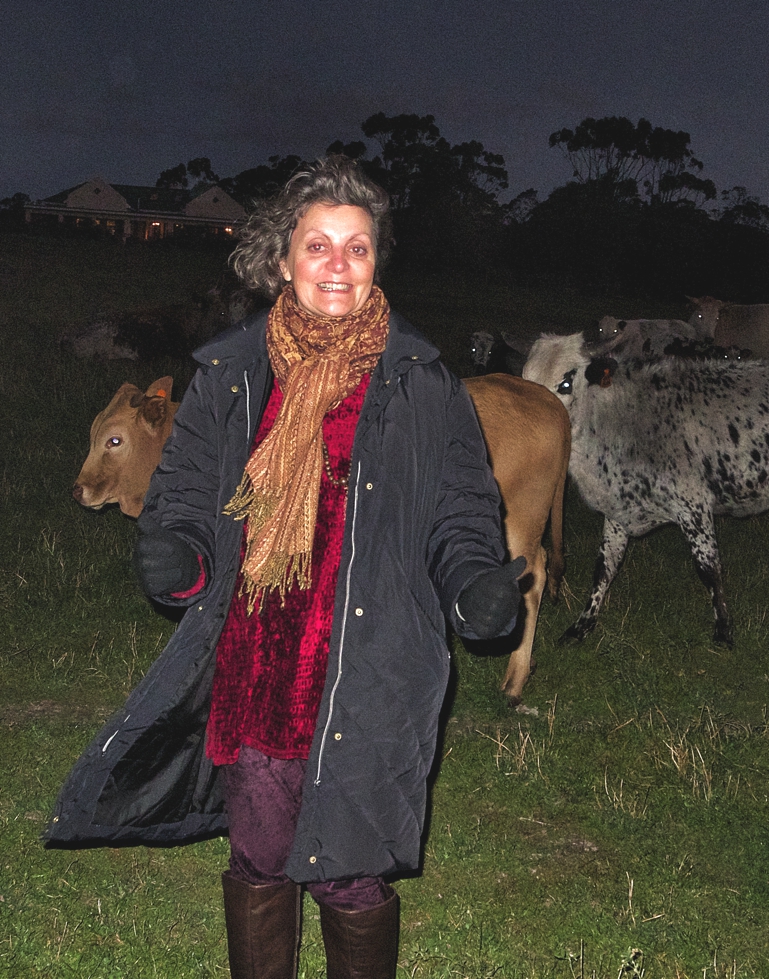 The sun was just about to set. The trees of the nearby eucalyptus forest were a-roaring, as fierce cold wind raced through branches and leaves. The Nguni cattle were gathered on the plain, some lying down, some standing, with a quietude absolutely opposed to the noise of the wind.

When I began to recite the poem, the herd moved in towards the words. I opened my palms to them, sensing they might want to nudge at this praise that I had brought them. The sky deepened in colour and everything was a-splendour in anticipation of the moon which would later rise.

When it did, it resembled an Nguni hide – ash-white and with  its craters forming a dark mottled pattern.

Nguni herds
Margaret Epstein
Translated from the Afrikaans by the poet

Nguni herds
shift silently as spirits
Across the face of the earth.

Back and back they go,
generation upon generation
through Africa’s history,
forming a bond between man and beast.
Reckoned in honour,
pride and wealth.

To reflect an eternal
forming and dissolving pattern
of shadows and sunlight,
mud, pebbles, rocks
and grains of sand.

In the silence of heat,
under thorn tree branches,
alongside pools of water and cliffs,
across centuries
the sound of bellows,
the blowing of cattle breath
and voices calling,
echo through a haze of dust.

Spoor of cattle and men
lie stretched out over plains
and mountains.
Their marked skins and graves,
eternal signs of temporary ownership,
are alone and deserted,
lost, disintegrated in the veld,
forgotten.

Now we stand
in this time and place,
to admire Nguni cattle, their distant past,
innocence and patience,
patterns of spots, horns, blemishes
and intimate family conversations.

Remember the old links,
but loosen the bridle
of today’s constraints.
Free your thoughts to wander with us,
to dream.