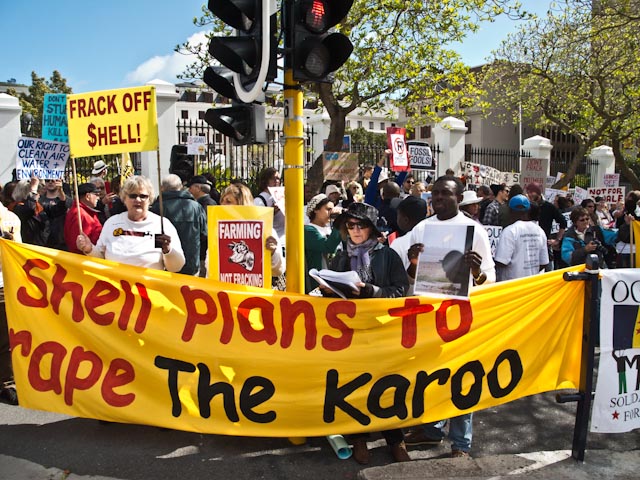 The poem was read aloud during the recent protest, held by deeply concerned citizens, outside parliament, against fracking in the Karoo. A man began a slow, deep chant alongside the words of the poem.  Another happened to have a tambourine with him, and  this he shivered to give the sound of stars. Cars, driving by, hooted in short blasts like trumpets.

“Oh my sister, Karoo.
I lie upon your brown ground
while the stars pour upon us,
like the white milky sap of succulents.
The little fox scurries, fans his ears,
listening as I promise you, sister,
to safeguard,
to let no harm befall,
for I love all that grows and breathes from you.

But the Oil Men come in a phalanx
and I cannot stop them,
for they are with Bankers and Miners and Investors and Politicians.
I carry no weapons.
Only my poems.
Oh my sister, Karoo.
My sweet sister.”