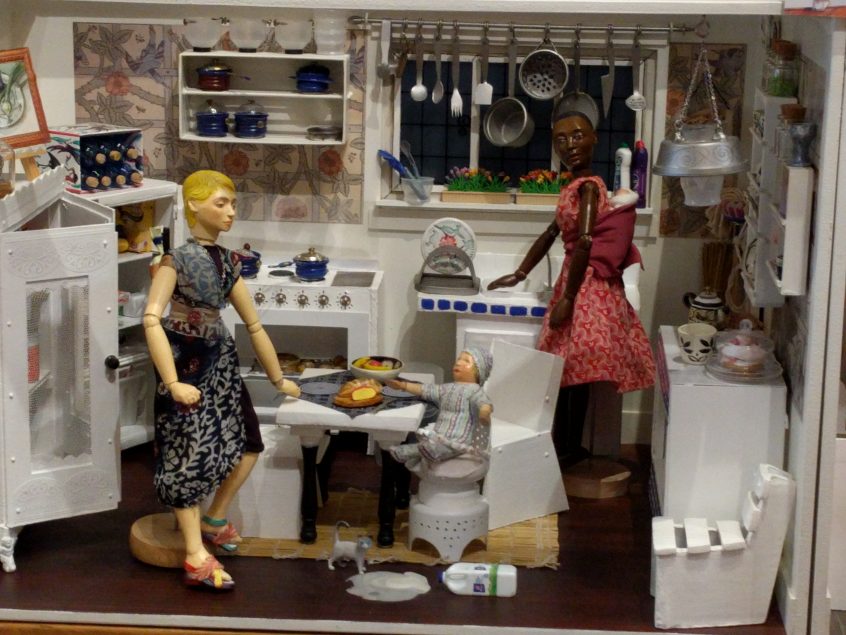 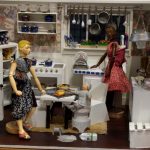 The South African figurative artist, Nicola Holgate, recently exhibited her Dolls’ House at Chandler House in Cape Town. It took her two years to complete and holds over 100 tiny pieces within five rooms which are exact in every detail. Wall-paper and framed works of art speak of tasteful occupants. Persian carpets cover the floors. There is a dolls’ house in the children’s room.

The first time I viewed it, I was not alone in the gallery. There was much ambient conversation and discussion and comment, so the dolls stood motionless, ignoring us, the spectators.

When I went a second time, I was alone. The figurines were busy in the kitchen. The mother did not glance at me, though she was aware that I was a story teller. Someone had spilt the milk and the cat was lapping it. The sink was full of dishes. The domestic worker, with her madam’s baby tied snuggly to her back, was humming and rocking to soothe it to sleep. A child sat in its high chair. The kitchen was warm from the muffins baking in the oven.

There was a sense that the mother felt a bit crowded, that inside of her was some longing to be young and carefree again. The father of the children was away, somewhere. She had a brooding in her heart, a fear that he might not return, that he lay in the arms of another.

In the dining room, the table was set, as though for a Sabbath meal. It was a meal at which some cataclysmic betrayal might unfold over sosaties and wors and bread and grape-juice. A slice had been cut from the melktert standing on the dresser, but left there, uneaten. Yet the table might just as well have been set for homecoming, festivity and the unwrapping of gifts. The narrative could unfold in any number of directions.

A berg wind came up and trembled the lace curtains. Enchanted, I was tempted to tumble into the Dolls’ House, like Alice through a looking-glass. I thought to lie on the white-covered bed, open the mother’s treasure-box hidden under the bed, and read the old love letters that it held. But then I heard a horse outside the little door, and discerned a rider dismount. I heard the turn of the door knob and watched the woman throw off her apron and rush into the embrace of He-Who-Had-Returned.

Instead of entering their narrative, I sat on the gallery’s sofa and recited a few poems, sotto voce, not wanting to disturb Chandler House’s curatorial assistant who was sitting nearby, but reading just loud enough for the occupants of the Doll’s House to hear.

and we fetched them from the airport
and home arrived with nightly prayers and steam pudding
and in the evenings my mother cooked pap
and vleis and we sat around the stumpy, glass table
and watched Animal Farm on SABC News
and we threw stones at Napoleon
and I passed my grandfather Eight Days in September
and with old eyes he read until he had to walk out for a smoke
and night came
and he called uTamncane and checked on the cows
and he checked on the sheep and the chickens and his wild horses, and the church listand the lost goat that had disappeared for three days
and when the beds began to call, my grandmother began uKristu Mkhululi Wethu
and our uneven voices were capable of breaking windows
and we knelt in thanks to the Almighty
and after the Lord’s prayer was sung, grandmother taught my cousin the words to Nkosi Ndithembe Wena
and after ‘Amen’ we answered the beds’ calls.

A bowl carved from mopane
cut from the rain forest
bought on the road to Victoria Falls
rests lopsided on my table.
Ingrained in the patina a whorl of rings
crosshatch across the curve.
Fingerprints of a wide cupped hand
offer ripe pawpaw
plums and speckled bananas.
Soft fruit in a bowl.

As the title suggests, this is not fun,
especially when the couch is as heavy
as a locomotive and the fridge
hasn’t been moved in years,
so that when it is, the horror
of what exists behind its mysterious
rear, is truly unsettling. I once bent
my back out of joint wrestling

a mattress up a flight of stairs.
I remember thinking about very little
at the time, other than that the shape
of the scattered stains pushed up
against my cheek looked like a map
of the Aegean Sea, which didn’t help
at all when I arrived at the fourth floor
to find I was in the wrong building.

Nondwe Mpuma is a Creative Writing Masters student at the University of the Western Cape. Her poems have appeared in one collection and an anthology.

Elizabeth Trew is a published poet who returned to South Africa in 1991 after 27 years away. She has worked as a librarian and teacher in various cities in England and in Johannesburg. She is a language editor and a volunteer at a shelter for girls in Cape Town.

Graham Dukas is a retired architect who now practices as a corporate coach, training facilitator and business consultant. His poetry has been published in various journals and anthologies. He is the recipient of the 2013 Patricia Schonstein Poetry in McGregor Award. He is currently studying towards an MA in Creative Writing through Rhodes University.