It was a glorious Saturday.

All about were the good aromas of raw produce, newly baked bread, cakes, coffee and delicious vegetarian fare.

Children and puppies were tumbling about. Couples were enjoying each other.

There was a flower seller, a basket weaver and a sky full of blue.

Douglas had just read a new poem, “Another Cup of Tea” (a follow-on poem from his “A Cup of Tea”) when a lady approached us.

“May I take a photo?” she asked in American accent, so we struck a nice pose on the bench.

“Where d’ya get yer Trader Joe? I guess ya’ll have been to the States?” she asked, and we realised it was my grocery bag that she was interested in, not us.

She told us that my Trader Joe bag had caught her attention immediately she saw it, and she wanted to capture it, here in this park, in Africa.

We laughed and saw the encounter as poetic, agreeing on how wonderful this thing called poetry is. It can be found in a grocery bag – full of good things like olives and cheese. It can arise from misunderstandings and can draw strangers towards one another, unselfconsciously, in the warmth of a Saturday market.

The sun comes up and finds him lying
in his bed, then on his bed,
finds him trying, quietly trying
not to cough, trying instead

to let his chest now quietly settle
after hours in darkness spent,
up and down, wracked by spasms,
stuck inside a coughing tent,

unable to clear, clear his chest,
unable to sleep and find that rest
of dreams in which he can imagine
drinking tea, no longer anxious,

he’s still alive and drinking tea,
consoled by heat and taste and sound,
kept in a life that’s understood,
the life that’s shared above the ground.
Another Cup of Tea is a follow-on poem from A Cup of Tea, which appeared in Heaven: New & Selected Poems by Douglas Reid Skinner (South African English Poetry Series, ISBN 978-0-620-60116-0); published by Left Field Poetry, Cape Town.

Douglas Reid Skinner has published five collections of poems and one collection of translations. 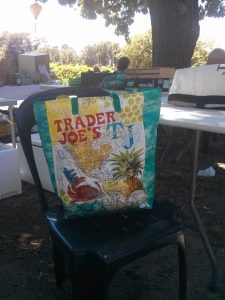 Listening to Douglas reading a poem at Oranjezicht Market