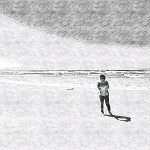 The British Poet Laureate, Carol-Ann Duffy wrote a commemorative poem, THE WOUND IN TIME, which was read simultaneously by thousands of people across British and Irish beaches.

I read the Laureate’s poem on Muizenberg Beach along with five poems from AFRICA ABLAZE! and ending with PSALM by Stephen Watson.

These poems cut as a shaft of light through humankind’s elected and macabre hallmark of recurring war and genocide.
I read them as the waves came toward the beach in formation
murmuring
like marching men and wounded men and dying men,
striking the sand
with a drum-roll.
A gull cried.
A cormorant closed its blue-back wings across its breast.
The carcass of a crab lay folded
like the bones of a trench-entombed soldier.
A train coming in to the distant station
screeched for the Last Post .
All hearts beat red like Flanders’ poppies. 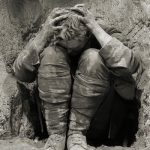