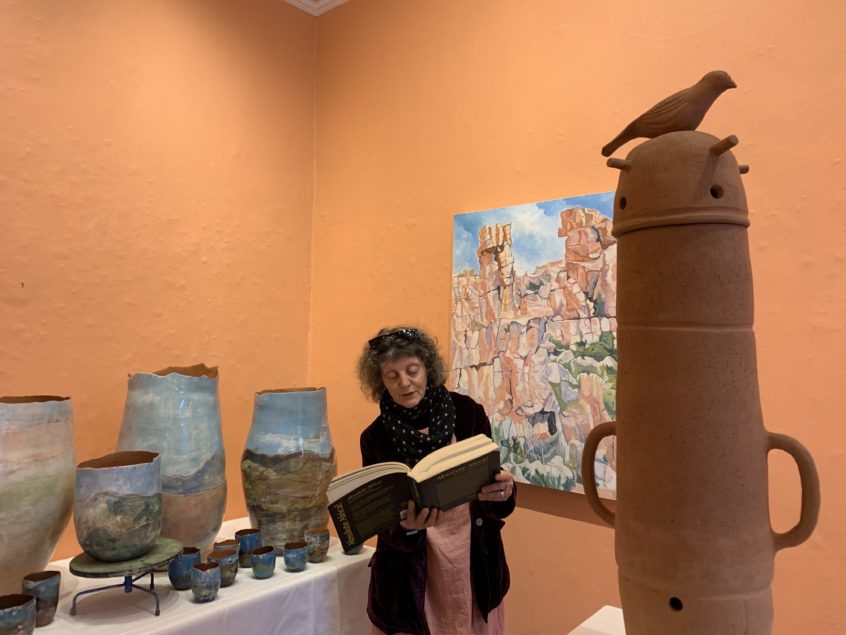 I went seeking art while confined during the Corona Lockdown.

This was found at various times of each day, looking out from my verandah across the City towards the Kramat on Signal Hill.

This art was expressed by clouds, by the moon in its various phases, by the pre-dawn dark as it yielded to dawn, by the velvet reds of sunset.

There seemed to be a master painter at work, exploiting all genres—those of Realism, Cubism, Pointillism, the Naïve and Fauvism.

On wet days there was the sense of a Water Colourist at work.

On the first day of ‘partial release’, as the Lockdown regulations were eased, my husband and I motored around the Peninsula, into the greater ‘Studio’ of Seascapes and Panorama.

As soon as the ‘real’ galleries opened, I went directly to Chandler House to view ‘A Return to the Earth’ by ceramicist, Wendy Coleman Brown, and oil painter, Joan Peeters.

Wendy’s triumphant trio, ‘Sons of Noah’, speaks of release and redemption, not only from flood or pestilence, but also the confinement we place around ourselves when we close our hearts to beauty and creativity.

Her vessels, some large and deep— reminiscent of canyons and valleys— others small, like the fountainheads of springs, are painted with Karoo landscapes.

All the colours and vastness are reinforced by Peeters’s canvases.

I was alone in the Voorkaamer when viewing these works.

These too carried the colours of landscape, of broad release, along with the splendour and mystery of it all.

Up before 5.30 am. Although there is no frost as yet, there is a new cold, close to freezing, outside my shack: it concentrates in the defile of the river. On my way up the valley the landscape is frozen under the moon,  then doubly frozen by the stillness in the cold. I hear the sound of the river, receding in the dark. In the echo chamber of its cutting, it has the sound of a night wind crossing dry plains. The moon is waning as I walk; two shooting stars fall across my line of vision. A hare starts up and sprints off through the frozen bushes, swerving.

‘Religion is what man does in his solitude.’ I remember these words of A.N. Whitehead.

It is still very cold this far up the valley, and the moon goes down as I retrace my steps to the farm. Almost at once the mountain walls go dark, the stars burn that much sharper. No dogs bark.

For a while longer, the western sky, farthest from the coming sunrise, remains a blue rouge, powdery, dry. Then the light takes hold, soldering the cast of blue – so thick it could be enamelled – that will be the sky throughout the day ahead.

The sun has moved much further north as the winter moves beyond its solstice, its daily trajectory a flattened arc over Dwarsrivierberg, the peak that forms the valley’s northern flank.

Now each day is formed in frost. Each one holds within it, like the earth possessed by cold day-long, the silence that is the frost.

From early on, the slopes are gashed by shadow. All day these go on deepening in their blue as that sun follows its low path across the sky.

Each day writes the history of its silence in those shadows.

And one lives in the dense suspension of that silence, while the sun, never leaving the eastern quarter of the sky, becomes a long sunset light, lasting a whole afternoon, the timber of the fencing silvered by it.

Wendy Coleman Brown is a Cape-Town based ceramicist.

Joan Peeters is an Abstract Expressionist, based in Cape Town.

Stephen Watson (1954–2011) was a renowned, widely-published poet, literary critic and essayist. He was Professor of English at the University of Cape Town and the director of its creative writing centre.