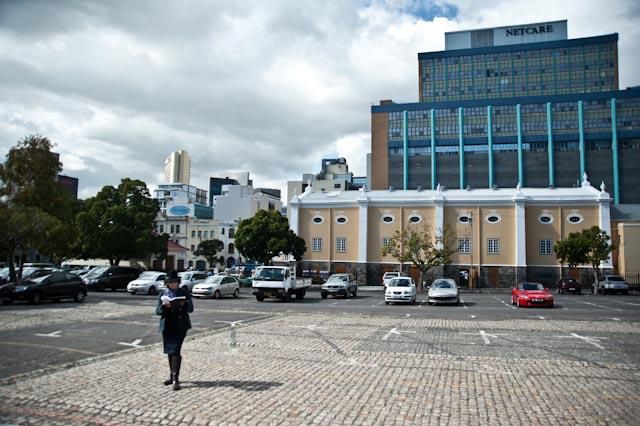 The poem was read aloud in Riebeeck Square. A man among the group of listeners asked whether I was Mrs Ben Trovato, wife of the the famous satirist, because I was wearing hat and sunglasses similar to Ben’s. I said no, and anyway, see, my hat has this faux-diamanté feather on it. He asked whether, in that case, I perhaps knew Ben Trovato and again my answer was no, alas.

And then I noticed that the stranger was also wearing a black hat and dark glasses, plus a black coat with big boots, and his shirtless torso was rather nice, like Ben’s which we sometimes see in his Sunday Times column photos. So I asked the stranger whether he was Ben and he said, well, you never know and by-the-way, who was Charlie and I said, oh, just an old soldier who was drinking at a bar, once. Soldiers write sad poetry.

Well, I was sitting over there, just now, and this woman starts talking about some lover that’s left her. So I look across and see, man, she’s lekker, and why would anyone want to leave her?

So I think about maybe I should go up to her and tune her a little something, but not sure what to say.

And then this song comes on. Lola. I heard that for the first time at the Coq d’Or and just took it with me to the bush, during the war. Every time I went out there, when we made contacts, it would just play in my mind. I’d be thinking about this Lola chick, mmmmet-her-in-a-house-down-in-old-Soho-where-they-drink-champagne-and-it-tastes-just-like-cherry-cola. Meantime there wasn’t a chick in sight, of course, just ous and all our war shit.

Is that what you’re asking me? I don’t know anything about poetry. But maybe that was poetry – not going up to her and saying something, not getting her a drink. Instead still stoking up on that Lola memory. Hey-Lola-hey-hey-Lola.

Found poem: Was that poetry? by Charlie is one of the more-than-200 poems in the anthology Africa! My Africa!

If  you’d like to order a copy please email African Sun Press afpress@iafrica.com