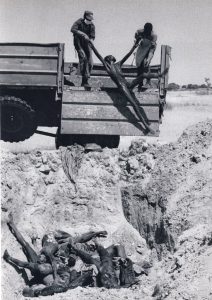 There is no dignity to mass graves.

They are neither marked nor noted on maps. The bush is expected to reclaim these brutal sites and collude in the disgrace of it all, by casting seeds and letting runner-roots conceal the nasty cache that lies buried.

When they are unearthed, they reveal a fearful tangle of knotted bones, bloodied fabric and suffocation. They speak of what is obnoxious in human nature.

I reflect upon untangling communities of the mass-buried-dead and of finding there something poetic: Perhaps a wedding ring. Perhaps a photograph. Perhaps a protective talisman given by a mother. Perhaps the very sighs of the dead rising up in a dirge as the weight of ground is removed. Perhaps the words of a prophet – simple and directive – telling us to empower ourselves with love and not with hate.

The bodies of 133 PLAN combatants killed during a contact with Koevoet at Oshimbimbi are buried at Uupindi, west of Oshakati, Saturday 8 April 1989

A man is thrown from the truck to join his comrades.
He is held up by the arms
by two local administration employees

His body seems not inert
unlike those of his fellows.
It is held open with arms raised
His is a death that moves
that falls
with all the weight of despair
and metaphor
of martydom
into an anonymous hole
of discarded lives
like an iconic nailed-Christ into a hole
horribly visible
before everything is covered up.

Patricia Hayes is professor of History at the University of the Western Cape where she runs the Visual History Research Project. She has published and co-authored numerous books on the history of colonial Namibia, gender and visuality. She has been short-listed for the Sunday Times Alan Paton Award.

John Liebenberg was conscripted to the military in 1976 and served at the Ondangwa Air Force Base near the border with Angola. He is an established news photographer whose work has been widely published and exhibited.